As a teen my school report often commented on my less desirable qualities, such as 'is highly evasive'. I was reflecting on this today after a wee bit of enlightenment at school. I've been wondering whether this negative quality as a teen afforded what my HT in 2001 described as 'incredible questioning skills for an NQT'. Of course it's nice to be complimented, but to be honest I don't think I realised it was a strength - no-one had mentioned it before. I've always encouraged thinking skills/independence/initiative, but mostly because as a working mum I needed my own children to make decisions for themselves. This is why at break times at school I refuse to peel the satsuma or banana (or start it off), or open the packet of raisins presented to me by our infants. That's what we're there for after all, to teach. Of course it's easier and quicker to do it for them, but then they will just come back next time and ask for help again, so I teach them how to do it themselves. It's obvious isn't it?

So today my revelation came when we were making twig crosses as part of our Easter enquiry. My children had collected their twigs and were given a pipe cleaner to tie them together. That was the scaffolding: a pipe cleaner is much more manageable for a ks1 child than twine. I didn't give them any more information, but showed them one made earlier and hinted that 2 pairs of hands were better than one. It proved to be a great problem solving skill for many and showed me the children who had determination-and stamina! I reflected on the skills that the new computing curriculum is encouraging and how forest school thinking is much the same. It's about processes. 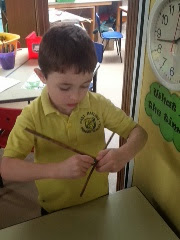 We have a Montessori quote up in the staff room that says 'Never help a child with something in which he feels he can succeed,' and this is something that my headteacher is keen to focus on during staff meetings. During the cross making activity today I observed two other adults' approach to supporting children with this. Their initial response to the children was to take the twigs and pipe cleaner and do it for them(!) When I asked one child, 'Have you tried to do that yourself?' the sticks were quickly handed back and he was encouraged to have a go. Did I help anyone? Yes. I held two twigs for a year one child who was desperately trying to do hers herself and just needed a stronger pair of hands to hold the twigs in place. I also suggested to two children who were complaining that they couldn't do it to put one lot of sticks down and try and work together. I suggested that other children ask someone who has done it to give them a clue. The children were working harder than I was, which is the point isn't it?

During this activity I really understood the logical thinking and prior knowledge that was required to bind the twigs together, from the mistakes that they were making. Although some of them didn't see it as a huge achievement, I could see the significance of their learning. Before the activity I hadn't considered the massive steps that some children would make and the amount of trial and error this task would require. There were lots of twigs falling on the floor, lots of impatience, lots of encouragement from me and lots of children pleased with their end product. Try it yourself, then think about what a big step this is for a year 1 child who won't know that diagonal ties will hold a cross more effectively.

I started to think about how this activity could have a greater impact if I used it to start a conversation about questioning, encouraging independence and using initiative in our next TA meeting. I am going to encourage our TAs to be evasive at times and answer children's questions with questions of their own. My most commonly used phrases are 'What do you think?' and 'How can you do that?' It's amazing how many children can answer their own question. So we need to stop answering / doing things for them that they can easily do themselves.

Posted by Sheli Blackburn at 12:51 PM