This post has been a long time coming - I didn't want to rush it (like I normally do), but needed to give it some thought as it is an issue that I want to address. I know that I risk getting publicly shot down for my views, but they are mine and I would hope that they are respected. I am coming from a primary viewpoint here, so would appreciate the reader remembering that we are not employed to teach one or two subjects, but are (mostly) responsible for delivering all.

I had an interesting time at the rethinking ICT conference earlier this year and met some hard working people who I have a lot of respect for. With the exception of a few that I had met before, they were nearly all twitter acquaintances, many of whom are doing inspirational work in education (and special mention must be given to Chris Leach who put this event together). At the end of the conference an expert panel answered questions from the audience. During this time I was stunned to hear the opinion that teachers should be sacked if they did not engage with new technologies*

My initial reaction was that it would be very uncharitable of educational establishments to sack teachers for finding an aspect of their learning difficult. Would we exclude a child who struggles or refuses to learn, or would we try our hardest to find a way of engaging them? Teachers get paid to do a job, I understand that, but technology does not come naturally to everyone and teachers have to keep abreast of  a multitude of new/recycled educational ideas each year. There is a lot to juggle. I thought about some of the people I have supported over the past few years, people who I have heard (and seen on twitter) being referred to as the school's 'Doris' or 'Mabel' (a derogatory term given to those who shy away from new technologies) and the opinions at rethinking ICT hit a nerve. A big nerve. So big that I felt compelled to challenge it by stating my disagreement of the expert panel's view. I was told that we wouldn't accept it if a teacher continuously failed to learn how to teach fractions*. My response to this was that fractions don't continuously break.

If I were told that I had to embed the Polish language in each curriculum area, I know that I would find it time consuming to learn and stressful because I would not always know if I were teaching it well. Imagine how I would feel the next year being told that the language had changed, to Bengali. One of my colleagues has no trouble with technology, but if he were told to include art in as many lessons as possible, he would probably not appreciate it! Likewise, I can read music and have always aspired to play the piano, but have not been able to devote the time to it. I played (one-handed) in assembly once and it was one of the most stressful things I have ever done. I know that these examples are not the same as embedding technology, but I am trying to make comparisons of the 'fear factor'. This is a fear of the new, the unknown and the things that could lead to public ridicule. Children as well as adults can be intentionally and unintentionally cruel with their frank opinions. Some teachers lack the confidence to put themselves in that position.

I myself never wanted to be an ICT coordinator; I find many aspects of technology quite dull. I have developed a passion for it because I am a curious person; I see the creative potential and the awe and wonder technology often brings and I want  slice of the action. Maybe it is slightly easier for me than some over 40s though, because I did computer technology at school (yes, it did exist in the 80s!) and I am not afraid of breaking things. I also had two children at a very young age and they had all manner of gaming platforms, remote control toys and then computers when they were older. My youngest son collected eggs at the weekend so that he could buy himself a laptop. I am not an advocate of the term 'digital native', but our children now have many more opportunities to engage with technologies than I did when I was young and the fear factor of 'breaking it' only arises when they are told by an adult things such as 'don't touch, you might break it'. Is this why they seem to learn more quickly? They are not afraid to try something new.

Yesterday I sat and watched Ruby, who is only just two, use an ipad. She had no fear and no anxieties and was happily expressing herself through mark-making. She was delightful! Conversely, trying to teach my 68 year old dad how to email and access the internet was incredibly stressful. He would not experiment, because he did not understand and his frustration quickly led to acute grumpiness. His fear was preventing his learning; he needed a lot of practise and repetition. So why do we expect our teachers to pick things up quickly and use resources straight away? I would challenge anyone who believes that teachers should be able to do just that, to attempt the same by learning a new musical instrument. 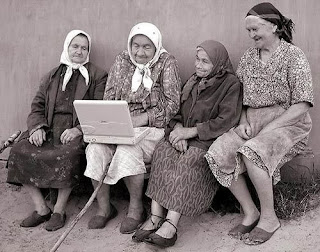 So what can be done about it? I would suggest that the negative opinion of sacking them be replaced with a more positive offer of support. Two methods immediately spring to mind: digital leaders and RiskIT.

Digital leaders are the best free resource at school to keep abreast of ICT. For example, when I introduced scratch and kodu at school, I knew that our hard working year 6/5 teachers would want their children to use it. I am ever aware of the hours that they put in and do not wish to add to their workload. Digital leaders are the perfect compromise. The teacher gets to join in the lesson, learn with the children and develop their confidence. Why not make a pledge to employ digital leaders and join our supportive network.

If you want your teachers to use new technologies, adopt a whole school approach such as  RiskIT. This strategy encourages and empowers teachers to explore ICT in a safe environment without making them feel pressured or ridiculed. I will definitely be promoting this next year in our cluster schools. I will not explain it any further here, but please read Jan's post by following the RiskIT link.

And finally - we need to stop negatively labelling our teachers! Self-fulfilling prophecy? Does our low expectation = low output? It's a hard enough job without people in the same profession being negative and knocking you down. Instead of questioning their 'inadequacies', maybe we should be asking ourselves if we have been teaching 'Doris' and 'Mabel' properly and giving them appropriate support. I don't just mean chucking a manual at them (could you learn to play the saxaphone that way?) I mean proper, personalised support. I feel that it is my duty as ICT coordinator to find out what our teachers know, what they need to learn and how best they can be supported to do so. Spending a little time reassuring them and ensuring that appropriate support systems are in place is essential. At our school it works well, because it is a supportive team. If someone struggles, we pull together to help them.


* that was the gist of it, I cannot remember exactly what was said.
Posted by Sheli Blackburn at 9:26 AM