I received a bit of a twitter bashing last Saturday night and was asked to have an original thought about computing. I politely declined. I have never pretended to be anyone else other than a teacher who learns from, or is inspired by, others. You may have 'got' that from this blog address. What I am is a grafter who likes a challenge and is competitive enough to want to be the best I can. I don't have to have an original thought when there are folk like Steve Jobs who I can learn from. I blogged this in Feb last year. 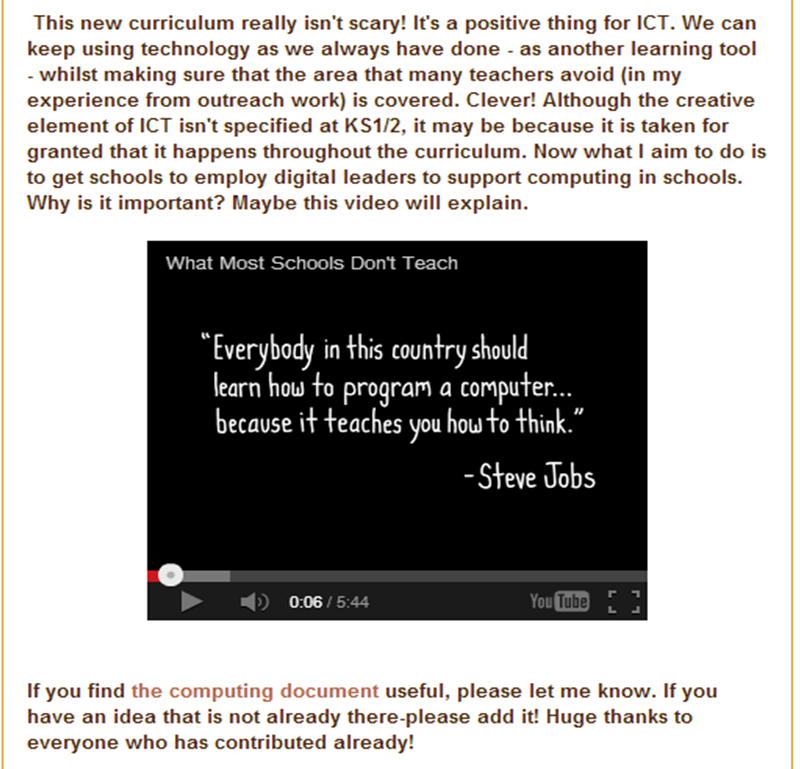 I don't know why I feel it necessary to justify that I do actually understand the purpose of computing, I think it's because I don't like being subjected to Saturday night sport. I haven't captured all tweets, but you'll get the gist.


I dunked out of the conversation relatively quickly (I was busy!) but @kvnmcl did get me thinking about how nobody has really blogged about the 'why' of computing. I rarely write posts at an academic level - they are meant to be practical advice for fellow teachers and others do it better than I. So I will write about my experiences again and how I have tried to teach ICT/computing well and hopefully someone will learn something! Please be considerate if you leave a comment, this is a first draft and has taken a week already (5 mins here and there, not literally a whole week!)  I am juggling lots of plates at the moment and dropping some ...

Although I had always considered my ICT skills to be good, when I began to teach the programming and control aspects of ICT to year 6/5 in 2006 I realised how limited my understanding was, despite doing 'computing' at high school. Using flowol was a new challenge and I admit that I didn't particularly enjoy it; it failed to inspire me. I hate the feeling of failure though, so persevered and tried not to shy away from the difficult bits, even though I felt my teacher training had left me somewhat unprepared for upper KS2. A few years down the line, when I became an AST, this part of ICT was what I was requested to support with the most as it was the area that was taught least well in schools. The difficulty for me was that the main reason I had become an AST was because of the way I taught through dramatic enquiry and yet the ICT requests were taking priority. It wasn't challenging me professionally as schools were not teaching the basics, so that's where I started. Resources in most schools were scarce; the one school I worked with that was resourced well couldn't keep their ICT coordinator in role beyond a few months; another school had a HLTA teaching all ICT. Don't get me wrong, she was amazing, but to me it kinda said something about the attitude towards ICT in the school. And so, it felt like a battle at times.

Where hardware was unavailable in schools it was a relief that free software was becoming available online.
I continued to develop my own understanding by attending conferences and training, such as the google academy and Naace hothouse (where I learned loads!) and teachmeets such as the Cambridge RaspberryPi one (where I purchased my own to play with). Having digital leaders in school meant that I had a group of beta testers to give me their opinions of the best ones to use in class.

When teaching control and programming to upper KS2 I have sometimes compared it with playing chess. You have to learn what the different pieces do (commands), you have to have an awareness of what you want to achieve and the strategies needed to get there. It is always good to show your children how some things are challenging and require determination (brain stamina, but that the learning process promotes both logical and strategic thinking - transferable skills. By using and apply scientific and mathematical skills in a different context they are consolidating and strengthening their understanding. This includes knowledge and understanding of cause and effect, variables, coordinates, directions, angles and shapes, as well as number work. 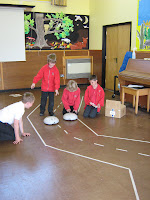 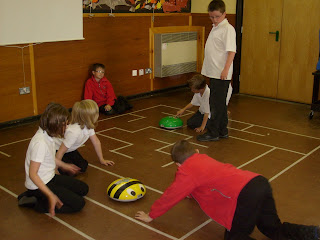 When I first introduced Scratch to my class of year 5/4s in 2008 I showed them the basics and what could be achieved, then set them off on some of the easier tasks. As they became more profficient I asked them to have a vision of what they wanted to create, based on their knowledge of what could be done, before thinking about the steps to achieve their goal. At this point I was thinking how Scratch could enable children to decide on an outcome, then think about/learn the processes involved in achieving that outcome. I told them they were using the same skills that a teacher does when planning a unit of work at school. I didn't spoon feed them, because I know that I learn best by doing. I guess it was partly the age of the children, or maybe it was more about their ability, but not one of them ventured past creating copies of the models already provided; they mostly created dancers, race tracks and chasing games, spending a lot of time on the paint part of Scratch.

Equally, I know that when I get stuck, I do like to be shown or told the next step-as a time saver
more than anything. We talked about this as a class and when questions were asked, I asked if anyone else could help. I couldn't always answer the questions and my children often found out things that I didn't know. Did this make me feel threatened? No. I realise that in ICT/computing they will exceed my skills quickly-partly because they have more time to play. Some of them were so enthused about what they could do, that they 'played' at home, extending their skills far beyond what I could offer them.

When a secondary ICT advisor told me about a new resource -Kodu -I realised that this could take their imagination further, as they would have to have a vision about what to create. This is one of the reasons I don't understand the 'computing is boring' view. When I first played with Kodu I followed a few tutorials, but quickly decided that I wanted to get creating. My idea was to mimic a Game of Thrones world, which in hindsight was a tad ambitious. Although I didn't give it any consideration at the time, this is the difference between what @ethinking describes as architecture and bricklaying. I had the vision - I needed to think about the processes to get there. In terms of bricklaying, it took a lot of trial and error to achieve just a small part of what I had envisaged. But this is good, right? I can speak honestly to the children I teach and tell them my experiences, that I aimed high but didn't quite get there. 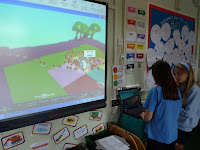 When I introduced Kodu to a group of year 5s as an enrichment afternoon, they quickly designed their own worlds, based on their interests. These ranged between shoot 'em style chasing games to a Kodu wedding and a war on a disco dance floor. The way that you could toggle between playing and creating meant that my digital leaders could see the effect of their algorithms quickly, and check if adjustments needed making. Did they find it challenging? Yes. Was it time consuming? Yes-although in one two hour session they had all created a mini world. The sense of achievement was wonderful.

Interestingly, although I assumed that the graphics and gameplay of Kodu would inspire children more, when my digital leaders reviewed them they generally preferred Scratch. I regret not asking more questions, because their responses of 'It's easier,' tells me very little. They felt that Kodu was trickier and took more time to achieve results; they needed to develop their stamina (plus Scratch offered Angry Birds ...)

When I was introduced to Hackasaurus, I had a play and immediately loved the potential of it for my 'dramas in the classroom'. I could be whoever I wanted to be - headline news! I have already blogged about it here, so won't repeat myself apart from saying that it is another great resource that requires children to have a vision, then think of the steps they need to get there.

Moving on to KS1 was a huge (massive) jump (challenge) for me, though the ICT side of it felt relatively easy. Before we bought the ipads, the control element consisted of Beebots and floor turtles, Sherston's Charlie Chimp and textease turtle. The ipads don't add anything to these great resources apart from the fact that the children are excited to use them - in the same way that they are excited to use the Beebots. 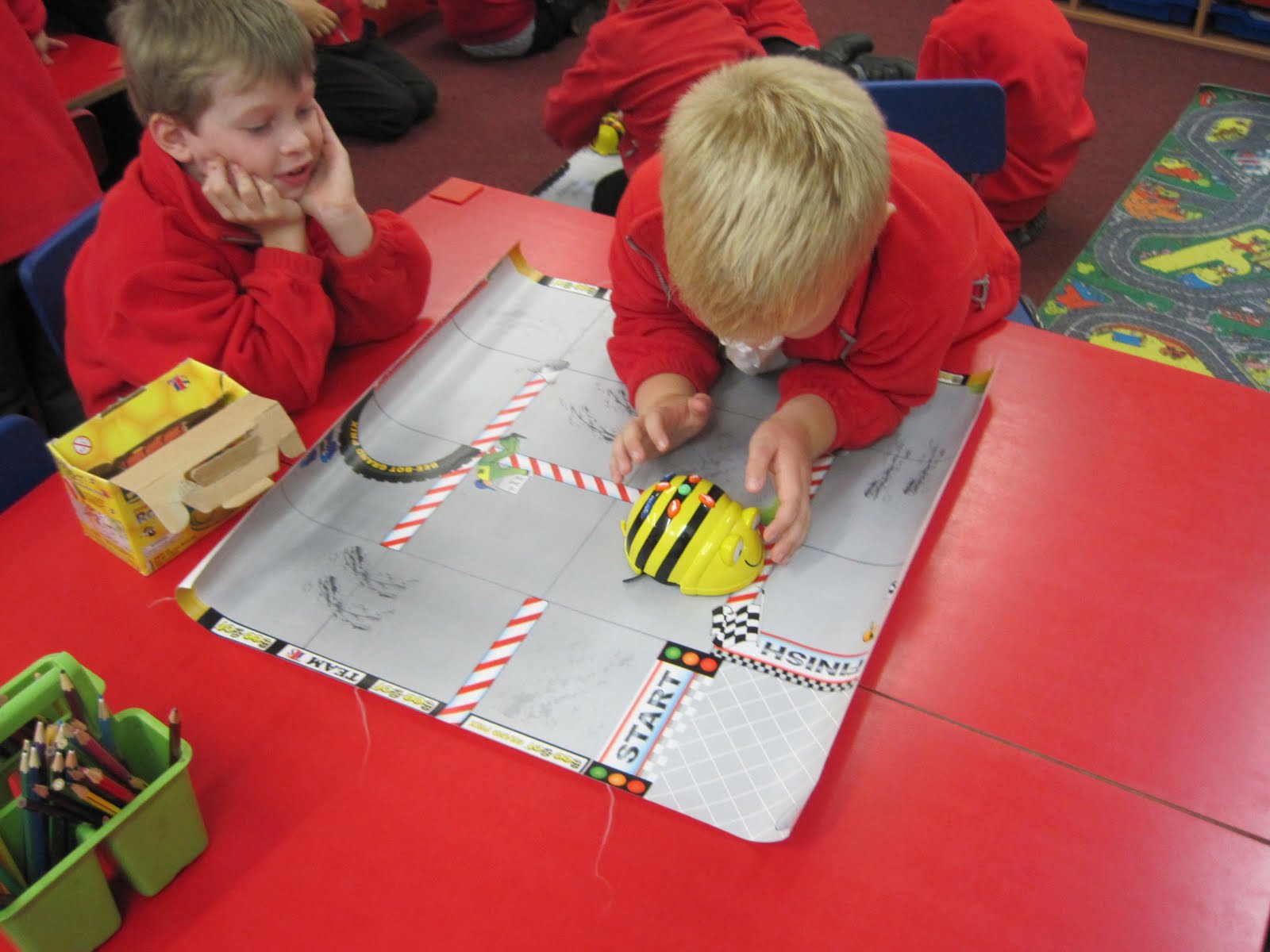 When the draft computing curriculum appeared I was employed as an ICT consultant in the cluster and there was a lot of anxiety around. I delivered workshops, staff meetings and cluster based computing mornings. During the latter I have always started without technology. It's the easiest way to get the children (and visiting adults) to understand what an algorithm is and what they are learning to do. Don't shy away, they love learning new words! Examples of computational thinking without the computer can be found here.

Rising Stars Switched on Computing with Microsoft written by @ohlottie

There are some free ipad resources shown here

Computing at School by Miles Berry

Hour of code and @worrydream's Should Children Program Computers?

Tablets in schools: coding, creativity and the importance of teachers

Posted by Sheli Blackburn at 1:12 PM