How we are using ipads at Roydon


Yesterday my digital leaders led a staff meeting to show off some new (and some not so new) apps. They started the staff meeting by showing what can be achieved with some of the apps with the offer of 1:1 support sessions with teachers straight after their demonstrations. They were marvellous! Our HT is relatively new to the school and will admit to not being particularly techy. She considered it to be a brave act on both parts, to let our digital leaders take control and teach the teachers. Eloise live-blogged about it on their digital leader site during the meeting and the whole thing was a great success. 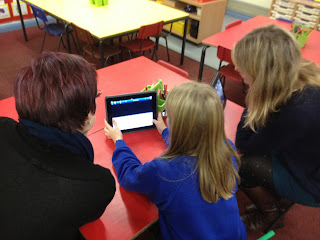 Why was it successful? Well there are a few of us at school that get enjoyment from playing with tech and trying out new things. I'm not saying it's a hobby, it's more of a desire to create awe and wonder in the classroom and to ,learn new things so that we can teach children to try new things. There are more teachers at school who don't want to take (more than necessary) work home with them. So whilst some of us have used most apps in the classroom, others are sticking to a familiar few. They wanted time to explore apps with experts on hand, hence the digital leader workshop. Here are the apps that my digital leaders showed:

So how am I using the ipads? Here is a quick reflection of how I use them in my practice.

I have four ipads in my classroom at all times. Quite often I have more than this and occasionally I have a whole class set. We use them to research and answer questions and I use them every day for guided and extension activities, as folllows.

Maths - I mostly use the primary games apps, maths sumo, pop maths and puzzle maths as brain breaks, rewards or to compliment work in class. Occasionally I will use an app as an extension activity. I have also used the ipads as whiteboards for children whose M+O work I want to monitor more carefully. They take screen shots and can email these to me, or blog them. I have recently asked one of my TaG children to create a screenchomp explanation of how to do partitioning. I will get her to create a bank of these maths tutorials. 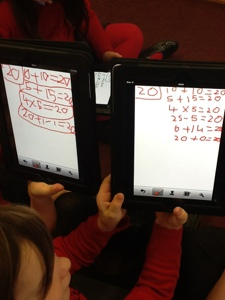 Guided reading/writing - I have 2 groups of children who use the ipads regularly for phonics/handwriting work. I have assessed where they are and so then can find the right sounds quickly that they need to practise. We use twinkl pop suite, Mr Thorn does phonics and pocket phonics for this.
For a small group of children who need support with their writing, I use the Collins Big Cat apps. They can read the story first, then there are enough visual cues in the way of scenery, characters and objects to scaffold their writing. We do have some good reading books on the ipads, but not nearly enough, so this is an area that I would like to expand next.

You can see how I have used ipads for whole class work by looking at our class blog. It shows examples of using book creator, puppet pals, art apps and writing with Collins Big Cat apps amongst other things. The ipads are often used for TaG children to publish their written work in a different way, or create impromptu animations.

I am using my ipads most lessons in class and it is my aim to get others to do the same. One way to encourage this is to have 20 minutes at the beginning of a staff meeting where all teachers share a way that they have used the ipads in class. Like a mini staffroom teachmeet!

Don't forget you can see all the apps we use at Roydon Primary on my ipad apps site.

Posted by Sheli Blackburn at 7:22 AM