Don't throw the laptops out with the bathwater

I am an ipad fan. I never thought I would be. I caved in to peer pressure (I never thought I'd do that either) when I sat between a fellow AST (@JenniH68) and an ICT adviser (@NorfolkTeachers). They got out their slick ipads, I got out my notepad*. I had complete envy when they started comparing apps, so when I left the meeting I went straight down to the apple store and purchased an ipad 2. I have not regretted it for a moment. 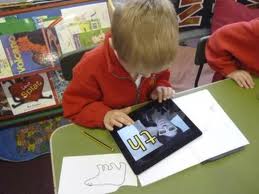 As soon as I had bought it and downloaded a few apps, I could see the huge potential for optimising learning in the classroom. I knew that the school had some money in the ICT budget, so I put in a proposal to our headteacher. He always liked being at the cutting edge of technology, purchasing IWB ahead of the game, innovating with the website and VLE and as a school I believe we were blogging before anyone else in Norfolk. Unfortunately at this point, he had announced his retirement and said it needed to be the new headteacher's decision. I tapped my foot patiently for over a term, frustrated about not being able to be the first school in Norfolk to adopt them.

We finally purchased 45 ipads in the autumn term of 2011 and haven't looked back. The way that they have been used will be written about elsewhere, but you can see how my 2/1 class have used them here and you can find out about the apps we have here. 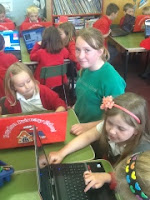 Much as I love the ipads, I am a firm believer that they do not (and will not) replace laptops. Here's why:

Also, we have a security system on the laptops to prevent children looking at / doing anything inappropriate. This is not on the ipads. We have not yet mastered saving work to the network either. So as you can see, we definitely won't be ignoring our laptops - they still get used as much (if not more) than our 'beloved' ipads!

*My ipad has not (and will not) replace my beloved Gruffalo notepad either ;-)

*Update on 14.2.2013*
For a more up-to-date post covering this and other matters, take a look at (my good ICT geeky friend) Ant's blog post. His blog will not fail to inspire you when you read some of the marvellous things he has done!

Posted by Sheli Blackburn at 1:51 PM