How can digital leaders have an impact on the computing curriculum?


A post for #DLChat on 17th September at 9pm

I confess that my work with digital leaders has been sketchy over the past couple of years. I left the role of ICT coordinator two years ago, but that doesn't mean I have lost my passion for what I believe to be an asset to any school. We do have digital leaders at East Harling and I am fortunate to work with some of them in our code club, but I am not directly involved with what they do for the school. I have tried to get KS1 digital leaders going (mini DLs as I like to call them), but this has proved difficult despite their excitement about the role. Time is a problem. I aim to try again this year! The reason I am telling you this is that the following is based on experiences that are over two years old. They are still very valid and I actually feel very proud of what we achieved as a school before the computing curriculum became statutory.

My digital leaders met at least once a week and had different areas of expertise, depending on their interests and what they wanted to learn. A couple were responsible for blogging and they updated their digital leader blog independently. They had lots of ideas, many of which came into fruition.

They hosted an open event where teachers and technicians (spot @kevin_sait!) came along to learn about the impact they have in school. I know that this had an impact as the ICT coordinator from my current school attended - and subsequently advertised for digital leaders. He has been supporting them in school for over two years now.

So what about computing? Well I like to think that between the digital leaders and I we left a legacy of good practice. I was always quite hot on teaching the computing elements of the ICT curriculum as I knew that it was the part that teachers shied away from. Being an AST meant I had to know. I also wanted to find resources and ideas that would inspire children to engage and teachers to develop the passion to deliver confidently. So my digital leaders learned how to use - and become experts in - a range of resources such as:

I'm sure there were more, but these were the ones I remember most. I did not teach them, they learned by exploring, breaking things and through trial and error. Pretty much the same way that I have learned. It seems to stick better that way.

They taught their peers during class ICT sessions, provided staff workshops and 1:1 support (depending on the teacher's year group), provided computing workshops for teachers in our cluster, presented e-safety sessions in assemblies, hosted kidsmeets, attended kidsmeets to learn new things and participated in cluster livewriting sessions to share expertise with other children. I have no doubt about the positive impact that they have had. I am very proud of one of my digital leaders who, after two years of campaigning to get her high school to employ digital leaders, has taken on the role herself. At the end of last year she had 20 year 7 digital leaders turn up! Wow! 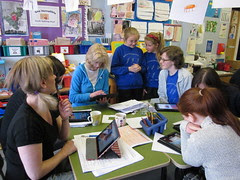 Of course the impact they have had is only measurable by the anecdotal evidence from other staff members, but I know that many felt more confident to try things out after they had received training from a digital leader - or they had them supporting in class. The laptops were being booked out more, staff were becoming more adventurous with what they were teaching and the children were leaving school with a greater level of skills.

I know that schools rely on passionate staff (or young people!) to keep any digital leader movement going. As a deputy, SENDco and year 2 teacher my time is very limited. My experience with year 6 digital leaders though was that they almost managed themselves. Some of them came more than twice a week and I was quite frank that they had to work things out themselves - and they did! At times all I provided was my room, meagre tips (and only when I could sense frustration) and the fact that I was available (often marking). So if you really want to get started but are concerned about protecting your time, promote an ethos of self-learned expertise.

In #DLchat I would love you to share your successes and struggles. Maybe we can persuade others to employ them this year and find out for themselves what impact they can have.
Posted by Sheli Blackburn at 10:35 AM