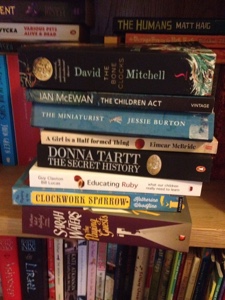 Every so often I write a post about the books I have been reading and thought it was about time I wrote one again (well I thought it was about time I wrote any post actually...). I don't write in-depth reviews, they take too long and I am lazy. These are just brief synopses of some of the books I have enjoyed, with no plot spoilers and with the intention that you are not influenced by my views (I save them for book club). They are all, in my opinion, good books.

Elizabeth is missing by Emma Healey

This was a quick read that really struck a nerve. Alzheimer's affects many people and this book made me think often of my dear granddad. It is written from the viewpoint of Maud and weaves together her childhood and the disappearance of her sister, with the disappearance of her friend Elizabeth. The characters were believable, easy to relate to and I actually felt humbled by the patience of Maud's daughter (so much like my mum) and the determination of Maud. It made me laugh, it made me cry and was enjoyable even though it worried me (lots of books with realistic themes worry me).

I am a big fan of  Cloud Atlas and have about four of Mitchell's books on kindle waiting to be read. At the moment my eyes are preferring real books though. Bone Clocks starts in the eighties and, like Cloud Atlas, has reality mixed with 'believable' fantasy, in both characters and events. I enjoyed it because I could relate to the teenage angst of Holly in the eighties and I like fantasy fiction. It was gripping from start to finish, with only a few 'what?!' moments (I liked the end chapters, but got lost/annoyed somewhere before that). The reader is reminded of global issues such as terrorism, war and what might happen in a dystopian future society (food, electricity rations, no communication systems etc, which always freaks me out). The characters are great and believably written, from the obnoxious Crispin Hershey to the charming Hugo Lamb. I am in awe of Mitchell's imagination and storytelling and would love to have a book club chat with anyone who has read it! (Though I finished it a few weeks ago now and find that stories often float out of memory.)

I bought this one for school. A great book to dip into for any fan of learning outdoors, it has great ideas that support our school curriculum.

The Narrow Road to the Deep North by Richard Flanagan

The name of this book was taken from a famous work of Japanese literature (one of the many things I learned from reading this) and is essentially about the building of the Thailand-Burma railway during World War II. It is harrowing and at times difficult to read. I am glad I read it. I wept many times because of the shocking conditions that these soldiers were in and the reality of how 300 soldiers can be treated so appallingly (and acceptingly) by the few in command. It brought back my psychology studies and a trip to a memorial in Borneo. It is a harrowing read. I sobbed uncontrollably twice. Once because of the compassion shown by a Greek man and his chip shop (I don't want to give anything away) and also the unbelievable, but true, part about the vivisections. There is a love story woven throughout, but this does not lighten it. I needed to talk to people about this whilst reading it, because I found it so incredibly disturbing.  A must read, even though I'm not sure when the best time to read it is - don't expect to sleep easily afterwards.


The Miniaturist by Jessie Burton

A quick and easy holiday read. I enjoyed it for that very reason - it was light relief after the previous book. It has a slight fantasy feel to it, though I thought more could have been made of that. On amazon they liken it to The Goldfinch and Girl With a Pearl Earring, but it is not really in the same league as either of those. It does have believable characters and a good storyline, but lacks the depth of the former and the atmosphere of the latter. That is not intended to be criticism - I repeat that I really enjoyed reading it!

The Children Act by Ian McEwan

This book has a similar theme to the some of the others I have read of McEwan's, in that a significant event has a massive impact on one of the key characters. The central character is Fiona, a high court judge who deals with family law and is having a bit of a crisis in her personal life. There are many cases that she deals with that make up this story, but the main one is about a 17 3/4 year old Jehovah Witness (Adam) who has leukaemia and is refusing treatment. It is not a lengthy book, but I didn't read it quickly as I found myself really thinking about the issues in the cases and in her personal life, which I think McEwan captured well. I wasn't entirely convinced about Adam, but that's more about my experiences with teenage boys than anything else. Well worth reading (and again I would really like a book club chat about it!)

Looking back at my past book club post, I realised that there are many other good books I have read in between that one and this one: We are all completely beside ourselves by Karen Joy Fowler (very different from anything else I have read and took me back to my psychology studies too); The Rosie Project by Don Tillman (loved it - much more so than other book clubbers - and laughed aloud a lot); Knight's Shadow by Sebastien de Castell (the second of his fantasy romps with a bit of a musketeer feel); Assassin's Apprentice and Royal Assassin by Robin Hobb (not as in-depth as other fantasy novels, but that makes it an easy and enjoyable read when your mind is on other things at work); The Girl on the Landing by Paul Torday and The Thirteenth Tale by Diane Setterfield were both good book club reads that I wouldn't have chosen myself.  I have read more, but some were not so good ...

I am now returning to my favourite genre of fantasy fiction, with Queen of Fire by Anthony Ryan, which I am loving. Ryan has cleverly written this in a way where I am reminded of previous events, without him repeating anything or making the links between past books and present forced.  I also have The Skull Throne by Peter Brett to finish. I started reading it as soon as it was published, but decided that I needed to read the three previous books again before finishing it (my shocking memory was not helping me understand parts of it!)

As always, I value your recommendations, though I do have a pile of new books to get through (thanks to my boot sale addiction and the generous vouchers from parents and work colleagues).
Here are some of the books my friends are reading. I'm sure they will inspire you! I love how Amanda has separated her piles. I tend to borrow 'work' books from the library, then forget to read them until they are due back...
Amanda Cockburn's 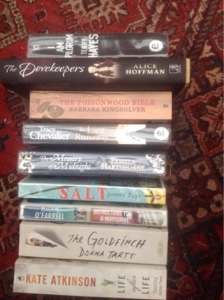 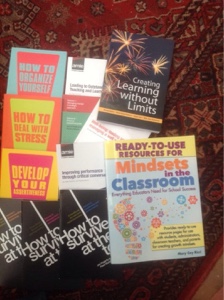 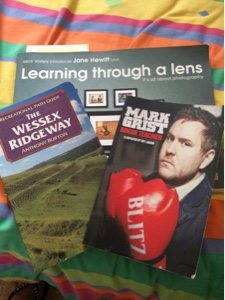 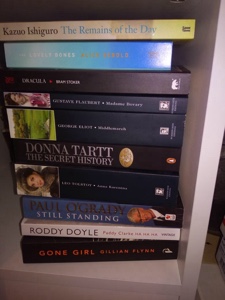 Posted by Sheli Blackburn at 11:38 AM