Hot off the OfSTED press

I have been following many twitter threads about OfSTED over the past couple of days and the will they/won't they grade teachers and lessons debate. In my usual lazy style I will refer you to the more knowledgeable and articulate bloggers who were involved in the roundtable meeting and to @Joga5 who gave reasons for his regret at the lack of primary practitioners at this meeting (I could not support my reasons in the knowledgeable way Bill did with facts and figures, but I still felt miffed!) His post is much more than being irked by it of course and the comments at the end add to what I will call a healthy debate. Most likely his views will led to something being done, which we all (primary practitioners) should be grateful for.

So, like many other tweeters last night I felt confused by the mixed/cryptic messages from OfSTED and those teachers who had met with Mike Cladingbowl, although a simple tweet from David Brown made it clearer (I hasten to add that I responded to his tweet about OfSTED guidance being my friend as stretching it a bit far!) 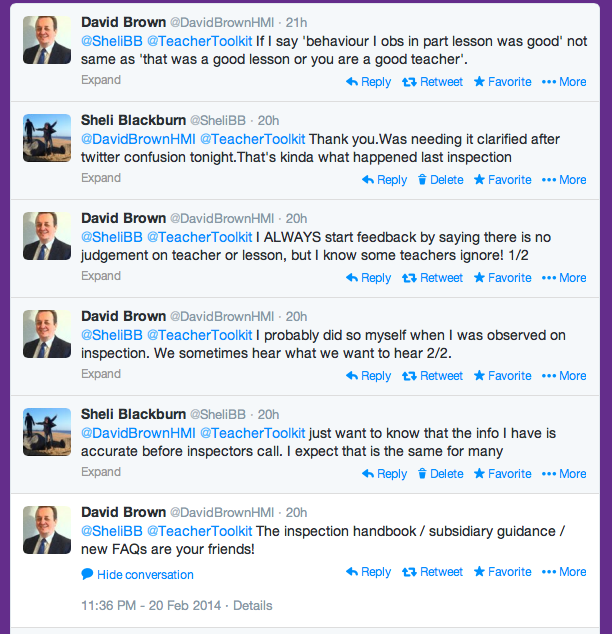 So today, instead of reading the updated blog posts, which I will list below for anyone interested, I will share a screen shot, hot off the OfSTED press, taken from

Why do OfSTED inspectors observe individual lessons and how do they evaluate teaching in schools? by Mike Cladingbowl 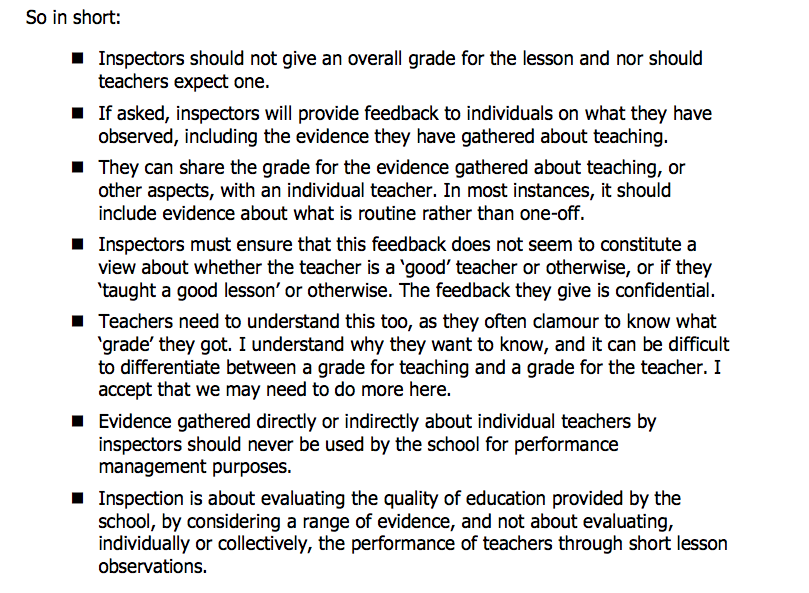 As a senior leader it is important to be clear about this, especially as OfSTED are due to visit East Harling. What I found interesting in this report was the fact that an 'all singing all dancing' lesson was graded inadequate because of the poor work in the books. A lesson where children were reading silently was outstanding for the same reason. This heartens me because although my children are making outstanding progress in reading and maths, their behaviours for learning are not as I would like them to be. Yet. I would hate to be judged just on the fact that they find simple transitions difficult.

I have to say though that I have read on twitter that some teachers who have recently been inspected have been judged and that some teachers are seeking judgements and getting them, which is contrary to what is being said. I think back to an esteemed colleague who was told just before she retired that her lesson was inadequate because in her role play (in EYFS) where all the children were dressed up as theatre goers to watch other children perform the Three Billy Goats Gruff, she told the children how the rich people would be seated first. This was not her being in any way discriminatory, it was her aim to add a historical context. Yes the inspector was gentle with her, but she was heartbroken and felt like she had let the school down, even though we were graded as outstanding. If only she could have been saved that.

So here is a reading list of posts from the 'roundtable bloggers', although in all seriousness I would suggest that you pick one, or you will find that a whole evening flies past - and you'll never get that time back! I'd just like to record my thanks to them all 9and @Joga5) for taking the time to share their news and views.

@teachertoolkit  5 go to OfSTED
@TomBennett Meet the Fockers
@thelearningspy Are we any clearer? and What I learned from my visit to OfSTED
@headguruteacher Meeting OfSTED

Update
Ross has created a great summary video. The original can be found here.

Posted by Sheli Blackburn at 12:55 PM

Email ThisBlogThis!Share to TwitterShare to FacebookShare to Pinterest
Labels: OfSTED