This morning we had a session in class dedicated to the control and modelling strand of ICT (I call it programming with the children, but will endeavour to use the word 'algorithms' in future in light of the draft computing curriculum.) Children had the choice of what they did and could move freely between the activities. Phoebe blogged about the morning on our classblog, showing she had a clear idea of our learning intentions, even though they weren't made specific (no WALTs or WILFs in our class). My mini digital leaders also took time to talk to a student and an NQT during assembly about how they used the ipads for learning. The adults were very impressed with the children's skills, knowledge and understanding and I felt very proud of them!

For this session I included controllable toys, iPad and computer games and activities. These included: 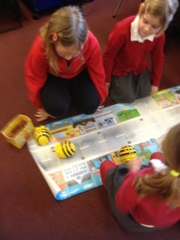 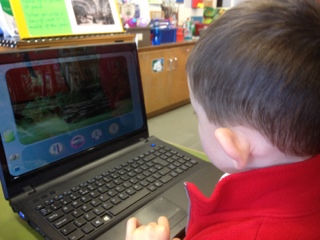 ALEX proved a very popular app as it does a similar job to the beebot app, but with a robot. This appeals to the children in class who find the beebot character a bit twee. Daisy dino was another hit, though I encouraged them to try Cato's hike and cargobot too. I will save Move the Turtle, Pettson's inventions and creatorverse for another day.


You can find some more of our favourite programming apps on my ipad site.

On the PCs we had Sherston Flobot and Charlie Chimp's modelling party, which the children really enjoy playing. I had also created a textease turtle resource that required children to move the Gruffalo towards the cave, following a specific route.

What did the children think? They loved the session! This was partly because although they knew they were learning, it didn't 'feel like learning'. I will repeat this session so that they can try more things, as some of them were having such fun with certain activities that they didn't want to move around. I also want to gain more of their views about the tools that they were using. The next session will be called 'try something new and CARRY ON LEARNING!'
Posted by Sheli Blackburn at 12:54 PM