Clicker sentences for the ipad

This is not a new post, but somehow I unpublished it ...

I started a masters degree in 2005 using action research to find out how children with SEN can be supported through technology. I was interested in learning behaviours and whether technology could have a positive impact and help remove barriers in a mainstream setting.


One of the resources I looked at closely during my action research was Clicker Grids for learning. I have always been fortunate enough to have desktop computers in my classroom, but had not explored Clicker in any detail. When I did, I was kicking myself for not having looked at it before. It enables children to use wordprocessing skills at their level and provides a wealth of free resources to support learning.

After training my TA to use it, it became the main writing resource for a child in my class. Clicker enabled him to successfully write his weekly news as well as write up scientific investigations, history reports and other cross curricular writing. I have used it with different children every year since, to support their reading and writing.

So why haven't I looked at the app before now? Well I had a good look at the last Bett show I went to - in 2013 - but at £18.99 it was a little pricey to put on our iPads at school, when we were already making use of it on our PCs. The reason I was keen to get it now is that I no longer have PCs in my classroom. It has been a huge change for me as I used to have two at my last school - but I had the space there too. My new classroom does not have room and although I have access to an old teacher laptop, it has proved to be too much of a distraction (they were tucked away in my previous classroom). What I do have is a class iPad, so I make use of that for meaningful interventions. I am sure that it will prove to be a useful resource in the future for a child with ASD who is currently in reception.

I have found it very similar to the PC version, in that you have to play around for a little while before you get the hang of making your word banks quickly. There are lots of models available for story/instruction writing, but it is at its most useful when it can be personalised. 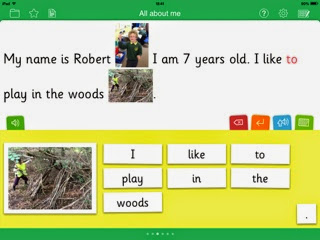 What I really like about it is that you can change the settings to aid progression. For example, you can have the word order as sentence order, or guided (only the next word in the sentence can be clicked on), alphabetical order or you can have random order as they become more familiar. 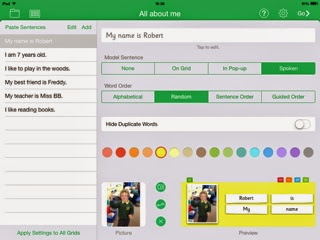 Having the words read to you makes this very accessible to children with visual impairments/visual processing difficulties. You can also have the sentence displayed at the top of a word set as a model, or in a pop up so that they can look at it for a few seconds before writing. 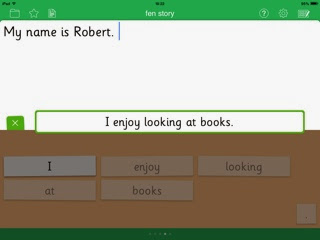 The great thing is that you can change the options for every sentence that you have prepared for the child to write. I know that this is going to be a valuable element to support children with their next steps. You don't have to provide all words for them either, you can let them attempt phonetically decidable words. For the first few times though I want to provide all of them as I want the child to develop confidence.

There are parts that I still need to learn  and I know that I could ask for help, but I want to make sure that I am using it confidently before I ask TAs to use it - I need to show them how to  set them up.

My next job is to find out how to import grids using Dropbox, then play with it for a bit longer (a job for tomorrow) then I will try using it with a child in my class next week. I will write another post with the child's views about using it.


I think this is going to prove to be a very useful app for a range of children, who will be able to see themselves as successful writers.

Come back soon to see how it has been used in the classroom.
Posted by Sheli Blackburn at 12:49 PM