I am going to attempt to live blog from my iphone at the festival. I will be spending a great deal of my day in the DigitalMe makeroom having lots of fireside chats!

I was kindly invited down by Tim Riches (@triches) from DigitalMe to talk about student digital leaders and explore the way that badges can be used to recognise their skills. With Tony Parkin and Doug Belshaw joining discussions this was too good an opportunity to miss!

The DigitalMe make room had a lovely fire burning in the fireside chat area and other areas for hands on learning, video diaries and musical interludes.

The first chat of the day was with Doug, talking about Mozilla Open Badges. It was an informative session and Doug did a great job of explaining the difference between digital badges and open badges. The part that I am most excited about is how you can create your own badges using badg.us which I will be trying later in the week. After the fireside chat people were invited to the 'make' area to use thimble to create their own web pages - and earn a badge.
I have my mozilla backpack and the two badges that you can earn from the Mozilla site, which I did at the Naace 3m hothouse. I earned my third badge with this thimble rant. It would appear that many badges are out there for the taking already, like kodu badges.  I am looking forward to exploring the ways in which we can make this work for our digital leaders and primary aged children. 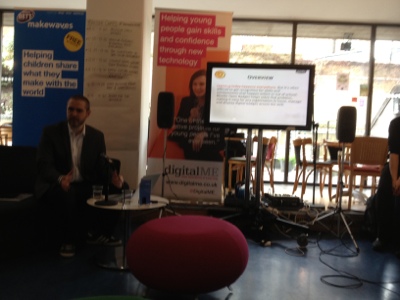 After a couple of breathtaking musical interludes and a fireside chat about musical futures (which I will blog about later), it was time for a SAFE chat with Kate. This has come at a great time as we need to rethink our esafety at Roydon now that our children are blogging more freely and bringing their own devices to school. Some great ideas and resources were shown, which can be found here. Kate did a great job of reminding us about copyright as well as issues with blogging, Facebook and other social media. We talked about badges and how digital leaders can develop their own safe skills, then peer mentor others, earning badges as they do so.

Our chat clashed with Hattie on the main stage, which was both a good and bad thing. Although it was disappointing not to see him it did leave us relatively audience-free, giving us time to discuss digital leaders and badges. During a previous session, Amir from Hamble College (possibly the first school in the UK to employ digital leaders, initiated by Kristian Still) had introduced himself. I had asked him if he could come back and join the discussions; it was great that he did. Carrie Philbin - a fellow #gtauk attendee - joined us and showed us the badges that she has created for her school. Carrie hosts  Geek Gurl Diaries which aims to inspire girls to get geeky in a male dominated workforce. With Tim Riches, Tony Parkin and others from the DigitalMe team it felt like there was a good mix of experience and enthusiasm in the group. One thing was clear, we are all hardworking and have a passion for student voice. I am very hopeful that the discussions will lead me to blogging in more detail about a future badges project.

The discussion about badges led to Cliff Manning telling us all about makewav.es and showing us the badges he has made for his students. Cliff gave us a quick demo to show how it can work within a school. I have signed up and will be having a play as soon as I get confirmation.

When I left the DigitalMe room I went looking for twitter friends, but bumped into Michael Rosen! I have to say that he wasn't anywhere near as excited at meeting me as I was him ;-) I very much enjoyed seeing him on the main stage (and told him so later) with Anthony Horowitz, who was funny and inspirational. Michael was passionate and political as always.

For much less 'chatty' posts see, Oliver Quinlan, Tom Bennett and Doug Belshaw's work. For a broader view of the festival, check out Dawn Hallybone's post with links to lots of other worthwhile reading.

Posted by Sheli Blackburn at 12:01 PM