Our ipad learning journey (so far)

Another post that has been a long time coming - but it needed a little thought putting into it. It is no secret that I am a BIG ipad lover and haven't looked back since introducing them in school. I have found them to be an asset in my 2/1 class and really do believe that they have optimised learning, as I will explain later. It has not all been plain sailing though and there have been a few hitches. I will try to document them as honestly and accurately as I can.

I had wanted ipads in the classroom since buying my own, having been inspired by their potential during a meeting with Jenni Hammond and Jill Duman. I took mine into the classroom straight away and let my children 'play'.* I could immediately see how every second of learning time could be put to use. For example, during lessons/when some children finish their maths, they can use the desktop computers in the classroom, but there is never enough time for them to collect a laptop, turn it on and get enough learning time before the bell goes. I don't always want to give them additional work, but computer based games are an enjoyable resource that they love.

So, I asked our headteacher if we could purchase some ipads. Fortunately, our head teacher was very forward thinking as far as technology was concerned. Unfortunately he was retiring and so decided that it would be inappropriate to make that decision. Whilst I understood and respected that, I also felt very frustrated. We had managed to keep ahead of new technologies and I was keen to keep abreast of innovations. 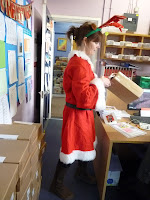 After waiting a polite amount of time for our new head to settle in (and recover from a broken ankle!) I broached the subject. Although she admitted to knowing little about technology, our new head was keen for us to continue to keep at the forefront of ICT innovations, so I went ahead and ordered 45 ipads in November 2011. This included one for each teacher, two for our Den (SEN room) and one for each child in the biggest class in school. Initially the ipads were going to be kept together and timetabled out in the same way as the laptops. After visiting another school that had recently purchased laptops, I realised that their use would be optimised if we shared them out between classes. So we have 4 in each class and a timetable where we can request to borrow other ipads if needed. The home screen on the ipads have been set with a picture of the class name (so mine have a badger on it) and the number allocated to the ipad. This makes it easy for children to return to the right ipad for their work, such as that done on book creator.

The first problem that we had was actually setting them up. They needed to be connected to itunes on a laptop to get them started in school - they were blocked from connecting to the internet. This confused me initially, as I had brought mine home and set it up without connecting it to a computer, so couldn't understand what was going on at school. This is a school network issue, which I'm not sure can be resolved due to restrictions. So staff had a choice: set them up via a laptop at school or take them home and connect to their internet.

Initially our ipads synched through icloud, but we were persuaded by our technicians to purchase a mini mac server to 'ease' synching. I'm not sure that I agree that the server has made it easier. With eleven teachers inspired by the ipads, we quickly ended up with nearly 400 apps on the laptops! These needed organising before they got even more out of hand. In my view, this is the responsibility of the class teacher. We have 4 ipads to organise and as long as time is made available, we should be able to keep on top of this.

The problem was that once a teacher had downloaded an app, then found it to be unsuitable, it had already synched to all the other ipads. Our ICT support team decided that they would send someone in to organise our apps and they arrived on the first day of a new half term, with no-one aware!
Then they wanted all the ipads ... In my opinion this was not the most efficient way of organising our ipads. We managed to draw up a list between us of apps we definitely wanted to keep, reducing the number to under 200. I also grouped the apps into files, so that all ipads would 'look' the same. Unfortunately this never happened as the technician took so long deleting apps from each laptop and synching them to the server. As a result we have ended up with 45 ipads that all look different, which is not particularly satisfactory and will still require time to put it right.

The children can find apps quickly with the search facility on the ipad, but they do need organising. Staff meeting time will be allocated, which is possibly what should have happened in the first place. We are definitely on learning journey with these - and hopefully our experiences will help the other schools in our cluster that have since purchased ipads.

I truly believe that we have already seen huge benefits from having the ipads in school. They optimise the time available because they are ready so quickly and they are so intuitive, easy enough even for our youngest learners. My children have accessed a range of apps, both in and out of the classroom and are writing blog posts with ease. Having a camera on them means that my year 2/1s don't need to learn the skills of downloading photos before they start blogging. Indeed our EYFS teachers intend to get their children blogging this year. 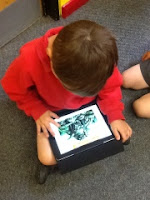 For group intervention activities I have used the ipads for phonics work, mental maths skills and guided reading. The children are excited to use them. I will be tracking year 1 progress using the 2simple EYFS profile app this year and will also be using a range of multimedia resources with my digital leaders. I am more than happy that we are getting value for money from our ipads - in my classroom. I will be monitoring the way that they are used across the school to make sure that we get value across the school.

This year we will be learning how to use a wiki app so that the children can save and retrieve their work.

To see some of the things my class have been doing, take a look at our class blog. To learn about the great apps we use in school, look at this ipad apps site.

Like most schools, staff at Roydon have a range of technical skills. All staff at Roydon work hard to learn new things, whatever their ability. The thing that I have noticed with the ipads is that their ease of use has meant that those who have struggled with some aspects of ICT before have a new-found confidence, which has then rubbed off onto other technologies. I will gather quotes later this term.

I mentored two NQTs (@j_santy and @wickybailey) three school years ago and felt really excited about their ICT skills and passion for the subject. They have been a great asset to the school and a huge support to me in my role as ICT coordinator. Their enthusiasm rubs off on others and it is great to have their support in teachmeet style staff meetings. It means that I am not the only one that others seek out for support too. A lot of time has always been dedicated to ICT development in our school and my role as AST and now ICT consultant has been a positive factor as I get time to attend conferences and shows to extend my knowledge and skills.

There have been many debates on twitter about ipads and many comparisons are made between tablets. My view about not exclusively having ipads has already been blogged about; a broad and balanced curriculum needs broad and balanced resources. What I dislike is people jumping on the anti-ipad bandwagon when they have never used them. I don't understand their gripes.
Nobody will truly know the tablets that offer best value for money until maybe a few years down the line when research has been done. Because of the quality of apple products and wide range of educational apps available, I really didn't consider any others. We have made the mistake of buying inferior resources before at great expense (digi-blues for example) and need products that will last. One of our ipads has survived being dropped and stood on by a child! We also have a huge range of 'software' on the ipads to inspire the children that really compliment existing school resources.
That said, I am very curious to know how much of an impact the ipads will have, so intend to do some form of research this year. Having like-minded people in other schools (@JenniH68) will help us make comparisons and will also allow us to continue to inspire one another. I am very much looking forward to continuing my ipad learning journey!

For other ipad related posts, take a look at Simon Haughton and Ant Evan's helpful blogs.

*I use the term play, because the children are playing whilst learning.
Posted by Sheli Blackburn at 10:01 AM

Email ThisBlogThis!Share to TwitterShare to FacebookShare to Pinterest
Labels: ipads