The hothouse linoit was created to store links to everything I have learned, but I thought I would pick out some of my favourites and explain them in a bit more detail.

Appshed was my favourite take-away from the hothouse as it was something very new to me. I was very impressed with Torsten's masterclass as he showed a range of ways it could be used in education, but learning that it was free was the icing on the cake for me! I like the fact that it works well with google docs and, although I don't understand it fully (I need to play with it to do that), I know that you can embed google docs and set up live polls using your app. This was demonstrated beautifully by Torsten and I'm sure it will not be difficult to learn. 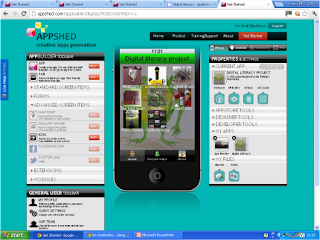 A chance to make an app came a bit later in the conference, with much appreciated support from Emma (@squiggle7) who had managed to collar Torsten for some 1:1 tuition! It quickly became evident how user friendly this is and @skinnyboyevans showed me how film clips (of his adorable son) can easily be embedded. Yes you need to play to learn, but there are helpful explanations across the site. It really is user friendly. Emma has written a great blog post about this app and I believe will add tutorials soon. Likewise, @skinnyboyevans (who I'm a little in awe of as he manages to write comprehensive blog posts and be a daddy to 5 children) has written a brilliant post with some really good ideas for using appshed.

For now, I have started to make an app to showcase the digital literacy project that I have been involved in (as in the picture above), for the purpose of learning how to use it, in order to teach others. I think it is too difficult for my year 2/1 class, but I know that my digital leaders will love it!

I shared information about inanimate Alice by @katepullinger during the speedshare. It deserves a mention here because it is a fabulous free online resource to get children writing, using a range of digital assets. You can read some of the chapters on the website and find some free promethean IWB resources too. A great way to inspire writing, using ICT. For some more inspiration about school projects, check out Kate's digital literacy work with a school in Ipswich.

Kindles in the classroom

A fantastic idea shared by @squiggle7 whereby children save their writing as a pdf to be read on a kindle (or an ipad in our school). What a great way to provide an audience and a good use of google docs too. You can read Emma's post here. Thanks for the inspiration!

@Cherise_Duxbury set up this amazing livewriting resource using coveritlive to live blog. Children are given a stimulus, which can be audio or visual (photos and films) from which they start to write. They then help one another to uplevel their writing. Cherise's children then copy their completed paragraphs to their own blogs. It has had a huge impact on the children's writing. @mbrayford has been another key promoter of this and has run some great sessions that my digital leaders and year 6 children have been involved with. A great idea and a great resource!

Before I talk about the free resources on the web, I would like to point out that there are some great apps for the ipad too. It was questioned recently on twitter and I was pleased to be able to give a list of notable resources that can be used to cover this area of the ICT curriculum, from EYFS to KS2 and beyond.

I love kodu, but during one of the workshops @ChrisMayoh found that there is a new mars edition, which led me to also find some fab Olympics kodu stuff! Very appropriate at the moment! 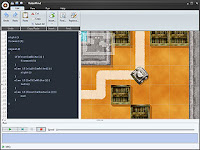 Robomind is a free educational programming tool that will help you familiarise yourself with the basics of computer science, by letting you program your own robot. It is a great introduction to programming techniques and compliments other programs I have used such as scratch and star logo.

I am very familiar with scratch, having first been introduced to it around four years ago in a G&T ICT session. It is a great free progamming tool with some fab ideas and resources on the main site here. I always use the scratch cards to start sessions and to be honest rarely take my own learning beyond simple games, such as marble racer, fishy games and angry birds. I wasn't in the masterclass at the hothouse, but I know that others were impressed with it's application across other subjects. The youtube links from the masterclass can be found on the hothouse linoit and are worth checking out.  I probably won't explore that further at the moment, because time is limited and I will not use it with my infants. There are some great tutorials here and here that I will show my digital leaders, so they can work independently (flipping the classroom?)

So here is an admission of my laziness. I like the sound of these two resources - popcorn and thimble - shared by @dajbelshaw, but I think I will learn about them alongside (or from) my digital leaders. The projects in thimble look great. You can make your own animal, animated avatar and have a rant (!) amongst other things. Popcorn will enable you to make 'cool web-base media'. A great resource for my digital leaders to explore I think.

Greenfoot is a resource to help you teach and learn java programming and was described as the next step on from scratch. I have yet to explore it, but thought it was worth mentioning. Likewise, yousrc is a free resource for app programming. You can see examples in the showcase.

3d tin looks a little bit like sketch up, but for making objects rather than buildings. @dughall has blogged about it - and 3d printing - and has said that it is intuitive with an interesting 'social' element. It is another useful tool that I hope to explore fully with my digital leaders next year.

The last thing that I would like to share at the moment is itunes u for edu. It is a free resource that will enable you to build your own educational courses. It is another resource that I will be exploring fully in the near future!

In the next post I will explore the naace ICT curriculum framework. What an inspirational conference this was!

Posted by Sheli Blackburn at 1:10 PM