Many people know what a drama queen I am. Not always in real life; as a true Gemini I can go from confidently outspoken to self-conscious, uber-relaxed to hyperactive at the drop of a hat. But I do love a drama in the classroom and I enjoy taking risks and trying new things. Dressing up and pretending to be someone else takes me back to my childhood and, whilst I have no acting ambitions, I like the reaction I get from the children. It is amazing to see how some of them can drop into the drama with me, instantly. 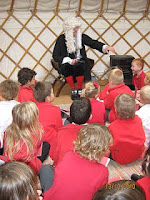 I have been lucky in the past to have other staff who are willing to dress up and drop in with me too. My previous headteacher has kindly been Samuel Pepys, Percy the Park Keeper, Henry V111, a French chocolate spy and a space cadet before. Teaching assistants have been in role as such people as Maid Marion’s lady in waiting and Jacqueline Wilson. This is not part of their job description, they do it because they enjoy it and can see the benefits. 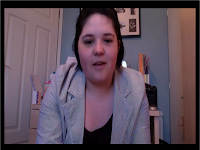 I have roped some of my family into playing a role too. My dad and sister have been giants complaining about small cakes, my son is regularly a manager, employee or traveller. Sometimes you need a fresh face though. So a few weeks ago I asked on twitter if anyone could help. Within 30 minutes I had a video message from Miss Read ( @MissRead10 )  asking for help from Badger Publishing company. 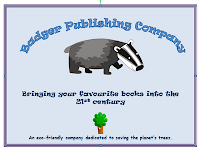 She was going on holiday and didn't have enough room in the case for her daughter's favourite book - The Hungry Caterpillar. She wanted to know if we could help. I wanted the children (in role as publishers) to come up with the idea that creating a book on the ipad would solve this problem. The initial problem was that my class were really indignant that Miss Read couldn't remove some clothes and put the book in! 'It's quite small after all!' Luckily, one of my chaps said, 'Well we could make a book and email it to her", which then prompted the ibook idea. We had used book creator before, but I wanted them to make an animated story, so I joined in as I always do (as an employee) and dripped some more ideas in.  The videos below are examples of what Badger Publishing company created.

This was a what I would class as a mini-mantle. Dropping into a drama for a short time (2-3 lessons) to achieve the desired outcome, usually covering only one or two curriculum areas.

The next mantle I wanted to do would involve many more curriculum areas. It needed to incorporate learning about night time and nocturnal animals as part of our work towards SATs. I asked another fellow tweeter (@normal_for_JP) if he would do me a small favour. I wanted a way of getting the children to try and deduce the difficulties of capturing nocturnal animals on film. I was expecting a short audio/film clip request for help to film creatures. I was absolutely amazed at what I actually got! See for yourself!


The mantle had already started in the morning with a letter of complaint
from a fellow nature lover, who said that the WPIT website was not very informative. Creating dilemmas is what gets a drama started and keeps it going. 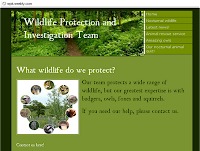 WPIT decided very quickly that they needed to add more content and should probably make sure that their animal facts were accurate, so they set to work. It was at the end of the morning session that I showed the film.
Initially we discussed the problem and the children reasoned why the animals weren't being captured. In the afternoon the WPIT employees filmed tips like the one below as a response for Backwoods Bill, which you can see on our class blog.

We carried on working on our company website that afternoon whilst I was plotting ways of extending the problem solving and learning from Billy's film. It turned out that I didn't have to do much thinking (as usual!) I had tweeted about the post on our class blog and by the morning we had a response from Ross Mannell (@RossMannell) in Australia! Even more incredible was the fact that he had responded with a post of his own! We studied it carefully and came to the conclusion that Backwood's Bill might not even know anything about the creatures he was trying to film. WPIT's solution to that problem - create a guide book for him. Great! Enquiry learning with outcomes and success criteria naturally set by the children.


As another part of our work on night time I wanted the children to learn 'Be Safe, Be Seen.' So cheekily I asked JP if he could drop into role again and have an accident ... Once again a brilliant film was delivered that kept the drama going. It allowed me to cover objectives, but once again my class thought that they had made the decisions about the learning and the outcomes.

So what can I say but a HUGE thank you to three fellow tweeters who have taken the time and made a big effort to add a bit of variety to my classroom.


What about me? Well I did make the effort in the end and drop into role as Backwoods Belinda - Billy's team mate. No film clip I'm afraid. My Australian accent was dubious and it was one of those times when I was glad that I was on my own in the classroom!


If you want to read more, you can see our class blog here.
Posted by Sheli Blackburn at 5:56 AM